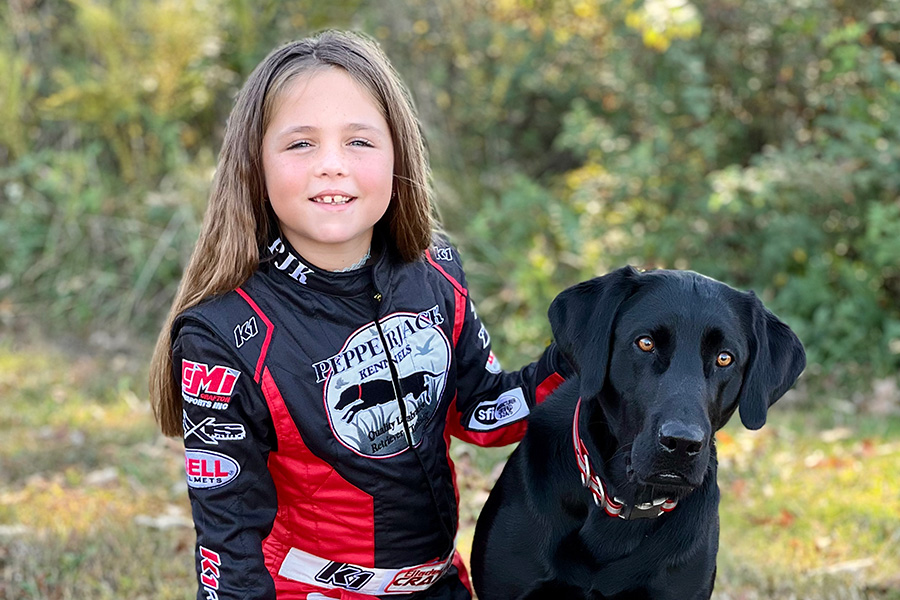 The daughter of Matt Crafton is racing Outlaw Karts, with sights set on Quarter Midgets in the future.

Woodville, Wisconsin (April 18, 2022) – Over the past few months for PepperJack Kennels, a Wisconsin-based retriever training company’s involvement in grassroots motorsports, much of the attention has been focused on their support of their star driver Derek Thorn and their support of Five Flags Speedway in Pensacola, Florida.

However, PJK is doing more in the area of youth drivers also, as they have been supporting Elladee Crafton since last year in the dirt Outlaw Karts with plans to help her move into quarter midgets in 2022. This young talent comes from a strong history of racing within their family as she drives for her dad a three time NASCAR Truck series champion Matt Crafton.

“We really like how the entire Crafton family is involved with Elladee at the shop and the track, Elladee is being taught all aspects of racing. We watch her help load the trailer and clean her kart and then jump in and race and have fun. It is so much fun to see these young racers that involved at such an early age,” Misty Melo owner of PepperJack Kennels stated.

As 2022 racing is well underway, PepperJack Kennels looks forward to watching the success and growth of their drivers as well as promoting the grassroots levels, encouraging more small businesses and companies to get more involved with drivers, tracks and all the people that support and put on these great weekly events.

No comments to show.